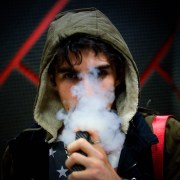 Vaping is not a safer alternative to cigarettes in the sense that it can have a negative effect on your teeth and your overall oral health. However, it does appear to have fewer risks in oral health than smoking cigarettes. Vape and e-cigarette devices are becoming more popular among young adults, and though most people would agree that these alternatives are much safer, there’s still a lot more to learn about its long-term effects.